Lawrence W. Shaw received his B.A. from Ohio Wesleyan University and his A.M. from the University of Pennsylvania. In 1972, Larry joined The Biostatistics Center as Co-Director with Jerry Cornfield and in 1973 was appointed Research Professor of Statistics. He served as Co-Director until 1980, and served as the PI for the National Exercise and Heart Disease Project (1972-80) and the Women’s Health Study (1975-80). 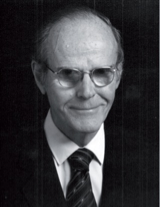